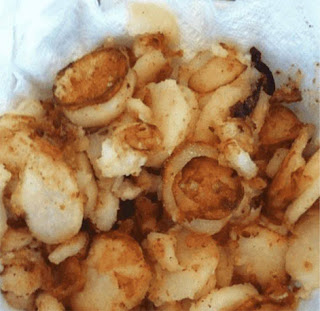 Enough peanut oil to wet the entire bottom of your pan

Salt and Pepper to taste

Garnish with paprika and fresh basil

Place a heavy 9” cast iron skillet over medium heat (just a little more than medium on my electric stove).

Pour oil into the skillet and add the butter as well. Allow this to heat until the oil is shimmery on the surface – not smoking – if it starts to smoke, pull it off the heat and let it cool some until it is shimmery again.

Cut up the potatoes into pieces that are the same size – chips or cubes – your choice.

As you cut, place into 4 cups of water that has 2 Tbs of salt mixed in.

Cut up onion into bigger chunks than you cut the potato.

After 5 minutes, drain the potato VERY WELL and dry with paper towels

When the oil is ready (shimmery) put the potato and the onion into the oil. Do not crowd the potatoes. If there isn’t enough room for them to lay side by side, then let some cook, remove them to drain on a paper towel and then cook the rest.

Cook for about 4 minutes on one side then flip and cook for another 2-4 minutes on the other side.

Drain on a paper towel. Salt and pepper as soon as you remove from the oil