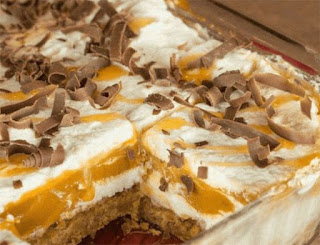 Press mixture into the bottom of a 8×8 baking dish. Bake for 15 minutes.

Use a hand mixer to beat cream cheese and sugar until fluffy.

Beat milk and pudding mix. If too thick, add a little more milk. You want it thicker than traditional pudding, but not so thick you can’t pour or smooth your pudding layer.

Chill 4 hours in the refrigerator, or until set.