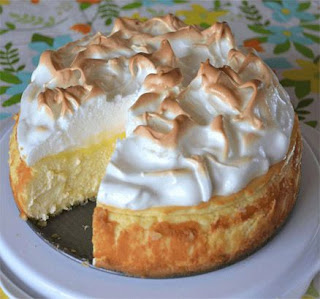 Mix cookie crumbs and melted butter together in a bowl until evenly combined; press into the bottom of a 9-inch springform pan.

Beat cream cheese, sour cream, and 1 cup sugar together in a bowl using an electric mixer until smooth and creamy. Add eggs one at a time, beating well after each addition. Mix lemon juice, vanilla extract, and lemon zest into cream cheese mixture, scraping bottom and sides of the bowl. Spread mixture over cookie crust in the springform pan.

Bake in the preheated oven until almost set in the center, about 1 hour. Cool to room temperature and refrigerate until completely cooled, at least 3 to 4 hours.

Beat egg whites in a bowl using an electric mixer until soft peaks form; add 1/4 cup sugar and cream of tartar and beat until stiff, but not dry, peaks form.

Spread lemon curd over cheesecake. Mound whipped egg whites over the curd, sealing around all the edges.

Bake in the preheated oven until meringue is golden brown, about 10 minutes. Chill uncovered in refrigerator, about 1 hour