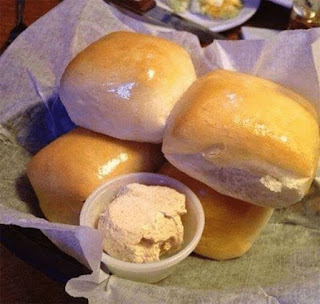 For the Honey Cinnamon Butter:

1. Put milk in a small saucepan over medium heat. Bring to a boil and remove from heat. Allow to cool slightly. (Or you can heat it in the microwave until boiling, about 3 minutes.)

Melt 3 Tbsp of butter in the microwave. Set aside.

3. Add remaining sugar, honey, milk, and 3 1/2 cups of flour to the yeast mixture. Mix together for a couple of minutes.

5. Add additional flour 1/2 cup at a time until dough begins to separate from the sides. Let rest for a few minutes.

6. Knead dough for about 5 minutes. Add additional flour by the Tablespoon if dough gets sticky, but should be moist. (Don’t dry it out.)

7. Remove dough from the bowl and grease the bowl. Return dough to the bowl and turn it over so all sides are covered in grease. Loosely cover bowl with greased plastic wrap. Allow to rise until doubled in size, about 45 minutes, depending how warm your house is. (I put mine in the microwave that was warm from heating my milk and butter.)

8. Once the dough has doubled, punch it down to release the air. Empty dough onto a lightly floured work surface. Using a rolling pin, roll the dough out till it is about 1/2-inch thick.

Fold the dough in half, so it’s now about 1-inch thick, roll over the dough a little bit to seal the two halves together. Cut the dough into approximately 2-inch squares.

9. Place dough onto a greased baking sheet and cover loosely with greased plastic wrap. 10. Allow to double in size again, about 1 hour.

12. Immediately rub the tops of the rolls with additional butter. Best served warm. Store extras in a zip-top bag.

For the Honey Cinnamon Butter:

In the bowl of an electric mixer fitted with the whisk attachment, beat the butter for 30 seconds, or until pale in color. Add the powdered sugar, honey, and cinnamon and beat until well combined, light, and fluffy, about 1 to 2 minutes. Serve immediately or store, covered, in the fridge for up to 5 days. Bring to room temperature before serving.

Serve the rolls warm with the cinnamon butter.