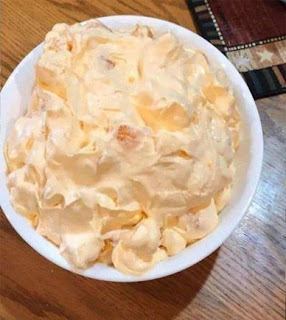 – 1 large can.Of mandarin oranges, you need to drain it.

– FIRST STEP: In a large tub, pour the orange jello box, then pour over it one cup of boiling water and mix them together until the Jell-o is dissolved.

– SECOND STEP: Add in the cup of cold water and allow it to chill in the refrigerator for 15 minutes.

– THIRD STEP: Slowly add in the vanilla pudding and beat using a mixer until fluffy, and then chill for another 20 minutes or until slightly thickened.

– FOURTH STEP: To the chilled mixture add the Cool Whip, drained mandarin oranges, and marshmallows, and put it in the fridge again until serving.

Don't forget to add it to your summer desserts collection! IT'S SO YUUUMMMMY!! YOU WILL NOT REGRET IT!