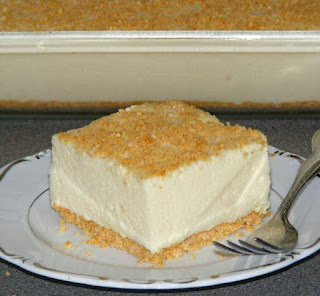 ° Carnation Evaporated Milk, I used a well chilled 12 oz can.

° Lemon Jello Gelatin, I used a -3oz- can, but you can use any flavor you like.

Step 1 – Shaking can evaporated milk, to begin with, also refrigerate for at least an hour until cooled.

Step 2 – Dissolve the Lemon Jello in hot water in a shallow mixing bowl, using a wire whisk, for 2 minutes.

Step 3 – Combine graham cracker crumbs with confectioner’s granulated sugar and melted butter. For the garnish, keep 1/3 cup of the mixture.

Step 4 – Firmly push the rest onto the bottom of a medium dish. Put it in the freezer.

Step 5 – Beat cream cheese with granulated sugar and lemon juice or vanilla together in another large mixing bowl, using a mixer, until creamy and fluffy.

Beat until well mixed in the cooled Jello.

For now, refrigerate the mixture.

Step 6 – Shaking can again & drain can chilled evaporate milk to another large mixing cup. Whisk until light and fluffy, about 4 minutes, on high mixer. The consistency of the crushed egg whites should be there. Stir in the cream cheese / JellO combination.

Step 7- On the cooled crust, pour the mixture.

Step 8 – Sprinkle the rest of the breadcrumb mixture on top. Until cut into squares, refrigerate for several hours.

A larger plate, such as 9 “or 12”, can be used and the dessert would be smaller.

Pour into small bowls and refrigerate for an easy, creamy snack if you have too much topping for the smaller jar.